Chiropractic is a primary healthcare profession that specialises in the diagnosis, treatment and management of musculoskeletal conditions that are due to mechanical dysfunction of the joints and muscles.

Within the U.K. Chiropractic is a statutorily-regulated profession via the General Chiropractic Council and should not be regarded as a treatment, intervention or mono-therapy. Chiropractors provide a wide range of treatments/interventions including, but not limited to, manual therapy, exercise rehabilitation and self-care advice. Chiropractic, like other healthcare professions, is informed by the evidence base and develops accordingly.

Chiropractic care is for everyone. Due to the wide range of treatment modalities employed at the clinic we will tailor your treatment to you. This is always based on the best available evidence, our extensive clinical experience and your personal preference. 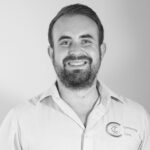 James became the owner of Camberley Chiropractic Clinic in 2015 having been an associate since 2009. Alongside his work within the clinic he is the first team Chiropractor at Millwall and AFC Wimbledon, having previously been chiropractor to the first team at QPR and Oxford United Football Club. Outside of football, James has treated the GB athletes at Masters Athletics Competitions both in the UK and in Europe.

James is an internationally Certified Chiropractic Sports Practitioner, and a member of the Royal College of Chiropractors Sports and Exercise Faculty. At present James is studying for a post - graduate Masters in sports and rehabilitation.

An area of special interest to James is how the feet can cause pain and dysfunction further up the body. He regularly uses a gait scanner unit, www.rightstride.com which is a metre long platform that can accurately assess a patient during walking. This information coupled with the physical examination findings allows custom orthotics to be moulded, which can help with heel, knee, hip and even low back pain.

Outside of chiropractic, he enjoys sports, (mainly weight lifting), keeping fit and agility training with his dog Jake. 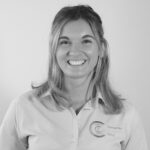 Laura graduated from the Anglo-European College of Chiropractic (AECC) in Bournemouth with a BSc (Hons) in Human Sciences and a Masters degree in Chiropractic. Having always had a passion for health and caring for others, Chiropractic seemed a natural career choice. Laura is a member of the British Chiropractic Association and is registered with the General Chiropractic Council.

Although Laura has a genuine interest in treating people of all ages, she has developed a special interest towards paediatrics and pregnancy and has treated patients as young as 5 days old! During her time at the AECC, Laura worked alongside student midwives to provide effective ways to help mothers establish successful breastfeeding, which involved examining the newborn baby for any musculoskeletal issues. Laura also worked at a satellite clinic at Bournemouth University to provide treatment for athletes with sporting injuries, as well as a wide range of musculoskeletal disorders the students and members of staff presented with.
In her spare time, Laura enjoys keeping fit in the gym and playing netball, having captained the Bournemouth University team, and socialising with her friends and family! 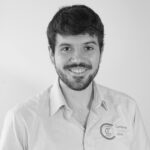 Alex James graduated from the AECC UC in Bournemouth (previously known as the Anglo-European College of Chiropractic) as a mature student. His journey into healthcare started after suffering from various gym related injuries; each time something felt amiss, he would go and see his local manual-therapist in the interest of finding out what had happened. This led him to take courses in sports massage, manipulative therapy and dry needling. From there he enrolled onto the AECC’s access course and then spent the next 6 years working towards earning the title ‘Doctor of Chiropractic’.

Prior to this, he spent many years working in the care industry within learning disability, mental health and young care leaver settings, giving him extensive experience in communicating with a wide range of people and further confirming that he wanted to pursue a people-based career. He is looking forward to taking a large number of post-graduate courses in order to both broaden his knowledge and help as many patients as possible.

In his spare time he can be found either at the gym or exploring forests as well as places to eat with his Fiancée.

Alex is a member of the British Chiropractic Association and is registered with the General Chiropractic Council. 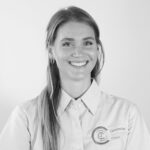 After attaining her BSc (hons) in Psychology, Antonia left for a job in Florida USA, working with schizophrenia and personality disorders. Whilst this was very rewarding, it was extremely challenging. Antonia sought a change and needed a role that would allow her to figure out where she wanted to go next in her career. By lucky coincidence, she took a job as a receptionist in a chiropractic clinic and within 2 months knew she wanted to retrain and become a chiropractor. Antonia then applied to McTimoney college of chiropractic where she was given an unconditional offer to begin her 5 year study.

Having trained at the McTimoney college of Chiropractic, Antonia is able to utilise both McTimoney techniques alongside Diversified ones, to tailor the package of care to her patient’s needs.

As a mother to a very active preschooler, Antonia spends her spare time outside enjoying fresh air, whatever the weather. Although she confesses she hasn’t quite got the skills yet - she is a keen gardener and loves tending to her vegetable patch. She has a special interest in natural health, herbs and nutrition and loves to see the body as a whole, approaching her care in a very patient centred way.

The use of the RS Scan pressure plate system allows for in depth biomechanical assessment of foot function during walking and running. This in depth analysis helps to better understand how the foot function might be affecting areas higher up the kinetic chain, such as the low back. This information can be vital for the proper development of a tailored, patient centred, treatment plan. If part of that treatment plan requires the addition of orthotics in the shoes, then the information obtained from the scan provides important information as to how they should be moulded. 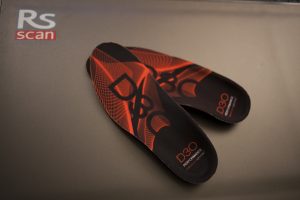 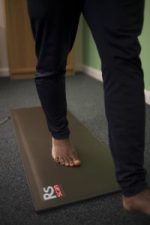 Extracorporeal Shock Wave Therapy (ESWT) is the application of Shock Waves in medicine.

It is clinically proven that pressure waves, when applied to injured tissues, stimulate metabolic reactions:

Red chili peppers contain capsaicin. At first this substance overwhelms the C nerve fibers responsible for transmitting pain but then disables them for an extended period of time. Everybody knows the feeling – first, the mouth is on fire, then it feels completely numb.

Research has indicated that shock wave therapy works the same way. When activated, the C nerve fibers release a specific substance (substance P) in the tissue as well as in the spinal cord. This substance is responsible for causing slight discomfort during and after shock wave treatment. However, with prolonged activation, C nerve fibers become incapable for some time of releasing substance P and causing pain.

A decline in neurogenic inflammation may in turn foster healing – together with the release of growth factors and the activation of stem cells in the treated tissue.

ESWT has been clinically proven to be effective for conditions such as: Calcific tendinitis of the shoulder;  Plantar fasciitis; Achilles tendinopathy;  Golfer's elbow;  Tennis elbow and more!

Laser is a form of Photobiomodulation therapy. This can result in beneficial therapeutic outcomes including but not limited to the alleviation of pain or inflammation, immunomodulation, and promotion of wound healing and tissue regeneration.

The fundamental principles that underpin photobiomodulation (PBM) therapy, as currently understood in the scientific literature, are relatively straightforward. There is consensus that the application of a therapeutic dose of light to impaired or dysfunctional tissue leads to a cellular response mediated by mitochondrial mechanisms that reduce pain and inflammation and speed healing.

Unlike traditional athletic tape that binds and doesn’t stretch, RockTape is engineered to mimic the human skin. This stretchiness is the secret behind RockTape. RockTape stretches up to 180% of its original length but has amazing ‘snap-back’ or recovery. This is what gives RockTape its performance advantage over other tapes.

RockTape can be used in a variety of ways to achieve different benefits: When RockTape is applied with little or no stretch on the tape but lots of stretch on the tissue it causes the skin to form convolutions and wrinkle. This creates a bio-mechanical lifting mechanism that decompresses the tissue just under the skin. It is believed that this decompression and having tape on our skin creates 3 main effects:

Fluid Effect: By causing decompression the tape promotes a more normal fluid dynamic in the taped area. Swelling is better able to flow out of the area, taking with it toxins which result from inflammation and injury. Also blood has less resistance to enter the area bringing with it more oxygen and nutrients vital for healing and recovery. This fluid effect is probably behind the dramatic improvement in swollen and bruised tissue that is often seen when Rocktape is applied.

Mechanical Effect: As pressure on the vertical layer cake of tissue between skin and bone is reduced more normal slide and glide mechanics between the layers of tissue is restored. It is likely that this is the mechanism that can make someone who can only bend as far as their knees, bend considerably more in a short space of time.

Neurological Effect: A lot of pain generated by movement or muscle contraction is generated by nerve endings in the space between the skin and muscle. As tape decompresses this space there is less pressure on these nerve endings so is reduced or stopped completely at its source. Having elastic tape stuck to your skin is also believed to stimulate receptors within the skin called Mechanoreceptors. These receptors play a part in our movement awareness, or what therapists call Proprioception. Many therapists believe that one of the main effects of applying RockTape is to improve our Proprioception, which can both decrease pain and improve the way we move.